The families made several demands that included better funding for the witness protection program to help solve crimes. The group also demanded Foxx do a better job at filing charges in criminal cases investigated by CPD. 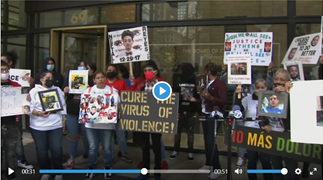 "You tell us you know who did it but you're not doing nothing about it. We are upset. We are hurt," one family member said during the rally.

Some parents are now asking for the federal authorities to take over their cases instead.

"Stand up for us, we put you in office to work for us," another family member said at the podium.

Foxx has recently faced criticism for decisions to release convicted criminals early from their prison sentences.

On Wednesday, the family of Olga Maria Calderon, who was fatally stabbed while working at a Wicker Park Walgreens, held a press conference and said her death could have been prevented.

"This event has shattered our families, has left my children without a mother and left me without the most important person in my life," Calderon's fiance Israel Alvarado said. "This could have been prevented if people cared."

The family has hired attorneys and said they are reviewing their legal options.

Sincere Williams, 18, has been charged with her murder. Police believe his intention was to rob the store but it escalated to murder. Police also believe he is responsible for other crimes in the area and an armed robbery at the same Walgreens days before the attack.

"What we wanna know is, why would the state's attorney allow a person who robbed a gun store be allowed to walk free to commit other crimes?" said attorney Frank Sommario. "If it is because he is schizophrenic, as is reported in the news, then why wasn't he required to be electronically monitored while getting the necessary medical or psychological treatment?"

Foxx also faced criticism recently from her opponent Judge Pat O'Brie, who said Williams' criminal history should have prevented him from being out on the streets.

O'Brien said that decision to remove the monitoring device came with no objection from Foxx.

"They apparently thought it was a good idea to release this man into the community unsupervised. And this is not the only time that Ms. Foxx has failed to protect the community, the victims, and a victim like Ms. Calderon in specific," O'Brien said.

ABC7 has reached out to Foxx's office for comment but have yet to hear back.

To read the original article: https://abc7chicago.com/politics/families-rally-demand-justice-for-victims-in-front-of-foxxs-office-in-loop/6429937/